Escape from Narvic HomeParc - a working response to the Sideways Festival

In return for a travel bursary from the Walking Artists Network to visit the Sideways Festival in Zutendaal, Belgium, I was asked to provide some documentation of the weekend's activities. Escape From Narvic HomeParc was a working response to a walk undertaken on day1 and is followed by a report of the weekend. 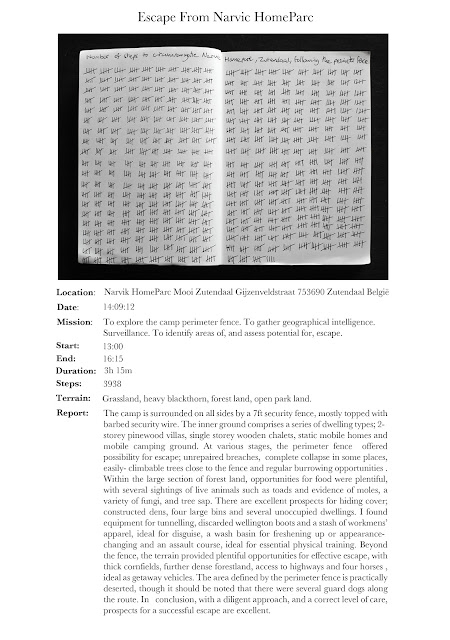 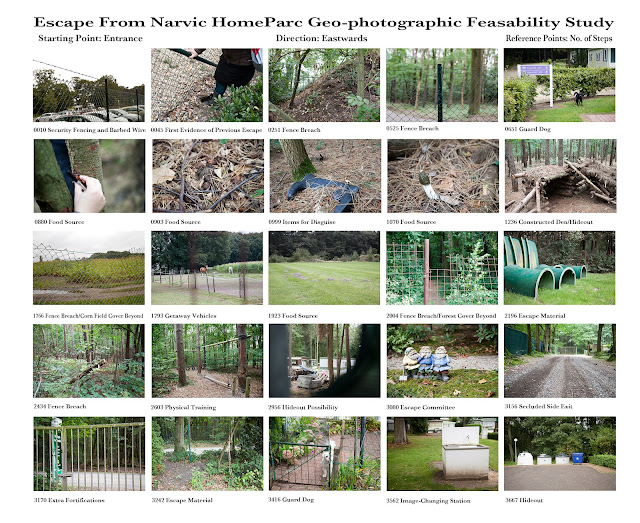 Documentation of Participation in the Walking Artists Network/Sideways Weekend.

My arts practice always starts with a walk. It’s how I find inspiration. The motion and the being outdoors allows me the freedom of thought necessary to generate ideas. Parts of my work inherently involve walking, usually as I investigate the spaces and places of my existence. I walk everywhere, simply as a utilitarian means of transport. And so, when I learned that the Walking Artists Network had offered me a travel and accommodation bursary to the Sideways Festival in Belgium, I was excited at the thought of joining other walking artists and talk about alternative views and techniques, as well as getting to hear about the scope and associated evnts of the Sideways trek across Belgium.

The first evening and the first part of day 1 was a little dispiriting, as after a longer than expect journey from Stoke-on-Trent to our accommodation in Zutendaal – 10 hours or so – it became clear that there was a level of suspicion about our involvement in the proceedings. The participants of Sideways, many of whom had been completely involved in their activities over the previous 4 weeks, and were understandably exhausted from their efforts, didn’t seem to know who the Walking Artists Network were or why we were there. I was really interested in hearing about the exploits of those involved in walking the Belgian cross-section, and hoping to get some real insight into the minutiae of the walk, but the schism between the two groups didn’t really allow this until, I later realized, the walkers had had a chance to recover, and evaluate their own experiences, in private. Although this was fully understandable, it led to a feeling of being an unwelcome intruder, which lasted into the first full day of the tip. On reflection, though hard to grasp at the time, the necessary close bonds forged through the arduous exploits of the walkers, and the stresses and strains of the Sideways organisers who had produced such an expansive and undoubtedly exhausting event, meant that there would obviously be a natural resistance to the arrival of a fresh, energetic and enquiring new group. I also think it was an unavoidable situation for the WAN organisers Mark and Clare, as they couldn’t have envisaged the mindsets of those who’d been walking so far and for so long.

It must have affected my thinking the next day, though, as after a get-to-know-you session with the rest of the WAN group, including a chance to get to hear about the work of Plan B’s Daniel Belasco Rogers, and also to chat to him about his GPS techniques, and an open walking ideas workshop in a communal villa, I set off on a walk of the perimeter fence of the Holiday Camp, with Anna Francis, and Phil Smith from artists walking group Wrights and Sights. As I walked and photographed and counted my steps, I realized I was thinking of and looking for signs and means of “escape”! As ever, though after a good walk, things seemed much clearer and a little more in perspective.

As happened the previous day and for the rest of our time, we spent the evenings at a beautiful farmhouse a short walk from our camp. Lovely home-cooked food was provided, a fair amount of Belgian beer consumed, and some great conversations had about walking and beyond.

The Saturday will live in my memory for a long while. It was a full festival day, starting with a Symposium – an academic examination of walking as an artistic and philosophical practice, which allowed for some good thinking time, with some really interesting speakers – particularly Jan Maschenheim whose talk about taking groups of students to walk in post-conflict cities and non-tourist magalopolises, walking arbitrary lines, alone, day and night, with no prior knowledge of their new place really resonated with me. He talked about “turning there into here” – a realization of place. He talked about walking as an experiential exercise, allowing one’s gaze to be educated through the process. Most interesting was his analogy of walking along roads as being akin to copying – as if you were copying lines of text from a book. The walker’s intentions are cut through and distorted by the ready existence of roads and paths and the work of the urban planner. I really got the feeling that Jan could have talked for double his 45 minutes.

After this, there was a chance to wander around the site of the symposium, stopping along the way to talk to a series of Sideways protagonists about their works. There were a dozen or so artists, and only about an hour and a half available to us, so not really long enough to get into any depth with more than one or two of the works, but I was glad to get the chance to hear about Giulia Fiocca’s guided tours around Rome’s hinterlands, and Martin Kohler’s cross section treks across major world cities – themes which largely inform my practice.

An organized 90 minute barefoot walk which was much tougher than I’d imagined, was really enjoyable, but the highlight of the weekend still lay ahead.

At around 7.30 in the evening, just as dusk was beginning to fall, we left the farmhouse base and joined a large group of around 150 people assembled outside a school in Zutendaal town. From there we were led by the Spanish arts collective, orquestina de pigmeos, on an interactive sound and vision tour of the town and its environs. I had no prior idea of what was about to happen – no-one seemed to know. We were instructed to be as silent as possible, a request rendered almost impotent, as the fascination of and in the events that followed meant that everyone was to enthralled to speak. Standing in a graveyard, the silence was only broken by the repetitive motion and spray of a water sprinkler on the football pitches in the distance to our left. Then, the sounds of children playing football. We couldn’t see them, but could hear them clearly and set off in their direction. By the time we got there, the sounds had diminished, and there was no sign of anyone – it was starting to dawn on me that this was part of a performance.

As we stood looking at the football pitches, suddenly some music started and I was aware that people were starting to turn round to look at the sports pavilion building behind us. The lights had come on inside and we could see a jazz/ballroom dance class in full flow – maybe 7 or 8 couples in full dance dress. A really magical awakening of a town’s everyday, we watched voyeuristically as we were given an insight into what goes on in this small Belgian town. From there we were led, in rapidly falling darkness through the town’s forestland, stopping to watch an engraver tap tap tap away at his work, hearing recorded testimonials from townsfolk along the way. We eventually ended up back at the farmhouse, where we watched images of haymakers beamed onto stacks of hay, as tow of the artists rustled their microphones through the bails. The evening finished with rousing accordion-led folk music and dancing and home-made apple juice. Words and pictures really fail to do justice to this piece of work, as it was the feelings and ambience created that was so special, along with the obvious levels of artist-integrity which had encouraged so many of the town’s inhabitants to so fully engage with the project. I thought it was a real piece of place-making as the artists brought the town of Zutendaal to life for me. A truly great piece of work.

I spent much of Sunday walking and exploring the strange architectural residences of Zutendaal. Each house seemed to be unique – overly architect-designed, in a particular style – ultra 60’s modernism, or quaint country cottage, but no two were the same. Coming from a northern industrial city characterised by rows of back-to-back terrace houses, I was fascinated by this image of surface perfection and individuality. I think I say “surface” because I had a nagging feeling that the same vision might be repeated in a not so individual unique way in middle-class towns throughout Belgium. Even so, it was another indication to me that walking equals doing and finding and seeing.

I have to thank the WAN team for offering me the invaluable chance to experience some works and events that will live with me for a long time, as well as the opportunity to meet and be with and talk to so many interesting and interested people.
Posted by renton at 21:24 No comments: